Where Have I Been - Part 3a - The Pilgrimage

After a long flight to Heathrow, my only paranoia is that the Big Brother in UK decides to put me back on the same flight back home just because my name has Khan in it. I have read enough horror stories. Lucky enough, the lady in the immigration only response was, “You came all the way to watch a football game? You guys are crazy!” Phew, that was seriously a relief.

UK as usual was grim and raining. But I was brightened up by meeting up an old friend I have not seen in ages. He was nice enough to pick us up from the airport and drop me off at the Euston station. With a currency exchange of 1 to 7, I will have to take any free stuff that I can get especially when travelling in UK is so damn expensive. Imagine 4.5 quid for a one way tube ride. That’s almost thirty ringgit man! 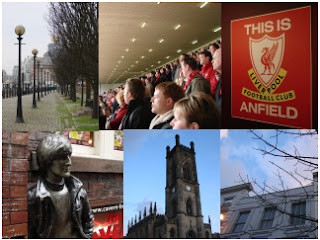 Anyway, reached Liverpool in the middle of the night where almost everything was close. Since it was still raining (surprise, surprise), we decided to hail a cab. As we hop on the cab, the driver was nice enough to tell us that the hotel is just one block away across the other side of the station. We were already on the cab and too damn tired to drag ourselves and our bags to the other side. We just told him, just go on.

The hotel was like a cross between Transylvania and some Goth-inspired 1600s building with goblin statues around it. It was pretty creepy but what the heck. At these times, one can’t be choosy.

Breakfast at the hotel was not exactly the greatest. They serve authentic British cuisine so you can imagine how it was. We also met some Malaysians who also came all the way for the game. It was a group of Man U wankers and were daring enough to wear Man Utd jerseys around the streets of Liverpool.

First day, we were still full of energy plus anticipation for the match. I told my friend, let’s get to the stadium early, less crowd, check out the surroundings and stuff like that. Damn, I was wrong. It was 9:30 AM and it was already packed with people. Match does not kick off till 12:45 PM. People were already on the bars around the stadium hitting the drinks. Beer for breakfast?

So there I was, right in front of Anfield. I felt like I just made my pilgrimage to the holy land of Football. I could die at that time and still be happy. That was actually striking off item no 1 of my list. It was so surreal I was getting goose bumps. So decided to check out the stadium museum and the official store. My friend was not too enthusiastic. Well what do you expect? He is a Red Devil. The joke was he had to buy a snow cap with LFC emblem right on top of the forehead because he refused to buy a normal when he had the chance. I made sure I had a good shot of that. That picture will come in handy one of these days.

Next step was to get into the stadium. As we were walking towards our gate, we saw bunch of people just waiting for something and the cops were holding line. We knew, this has to be where the players come in. So we blindly waited there for like thirty minutes with the hopes something actually happening. And a bus came and it was hoarding the damn Man Utd players! Well at least I managed to give them a scoucers welcome to them.

So finally we reach to our seats, the stadium inside was still empty. People were just too busy drinking outside and you can’t bring them into the seating area. It figures.

It was a perfect weather day for a football match and I could not be happier. The Kop as usual started singing the club anthem “You’ll never walk alone” and the giant banner being unwrapped. Being there at that moment gave me the goose bumps. Well then the game started and Liverpool can count themselves unfortunate to come away from the game with nothing after being more than a match for their opponents. Damn Man Utd, carried out a smash and grab job at the 90th minute. Frankly, we did not know who scored till the next day when we read the papers. The scoucers did not take it well especially a loss at home to Man Utd. Anyway, enough about fottie, after the match, we decided to hit the streets of Liverpool. But at that time, I felt inner peace that I am ready to die.

Liverpool is not exactly the most exciting or happening city. During its heyday, it was one busy port. Nowadays, after hit by the recession in the 80s, it’s still trying to rebuild itself. Most of Liverpool’s offering lies within one street, starting from St John’s Complex then along Victoria Street all the way to the Anglican Cathedral. After some shopping, decided to check out the movie scene. The theatre was a bit different from what I had expected. It was an art gallery/movie theatre which got me confused for a while. On top of that, all was playing was British movies which you typically do not see the promos back here which convinced me it was some art house screening. Then there was a movie called “Hot Fuzz” which I was pretty sure would be an art movie. So we took the risk and it actually paid off. It was actually a movie which pretty much makes a parody out of supercop movies such as Bad Boys and some other. But we fell asleep halfway through the movie. Not that it was bad, but it was the jet-lag kicking in. we did manage to get the end and from there straight back to the hotel.

The day in Liverpool photo album