My flight to Beijing was an interesting one well minus the fact it was at 12:55 AM. Instead of being stuck with my feeble colleagues, God decided to put with me with some unknown girl. Wasn't a bad one either! After I was all settled in, I decided to say hello to her since she was looking darn depressed and groggy. I reckon it was because of the time of the flight but my mates supposed that it was because she was sitting next to me. Their jealousy was so transparent.

The introduction wasn't the best actually. She introduced herself and distinguishing her reason of departure was to meet her husband whom she has not met for the past two months. OK it was a serious turn-off for a while, but what the heck, the flight is 7 hours long and I need some entertainment. Plus, I wanted to make sure those green-eyed monsters were all burning inside. After some ice-breaker questions, everything seem to take off pretty well from there. 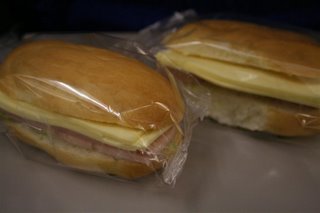 What broke my heart was, indeed her husband was there at the airport to greet her. Damn!

I wasn't so lucky on my way back. Actually I can't remember what sat next to me. I am pretty sure it was some form of Homo sapiens.
BJ, 3:39 PM