The other day my friend took my iPod and went browsing through. Then, he looked at me and asked "Who are these people? Other than The Beatles, Eric Clapton, BB King and some other fellows, I have no idea who you are listening to". The amused me looked at him and asked "You never heard of Jimmy Page, Bob Dylan, Pink Floyd and The Who? What planet are you from?". From there on, I went berserk but at the same time struck to me. I’m probably one of those ageing rockers. I am not that old, heck; I was not even born during the era. I am supposedly a generation-Xer.

I have said before that I don't impose my music on others, but I still know the existence of others out there. I just don't appreciate them.

Then I traced back my decisions in life (in regard to music). When everyone went crazy for new modeling amplifier, I was scouring for a stage lead that does not do any fancy sound and it was made in 1984. Mind you, that time was year 2002. And when everyone awestruck with Paul Reed Smith (PRS) guitars, I was still salivating to Lucille. 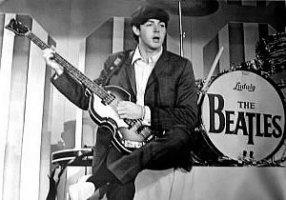 I even custom ordered Paul McCartney’s Hohner’s bass from Epiphone while Hohner themselves stopped producing it in the 70s. My fellow rocker (ageing also) found the original Hohner manufactured in 1964 in a pawn shop, my heart just stopped. I seriously considered poisoning him so that I can take ownership of the bass guitar.

Relating to this year’s Super Bowl half-time show, I refer to my friend, TulisJe’s post

"Everyone's calling last night's Super Bowl Halftime show boring. I didn't find it boring at all. Man, I'd give anything to be able to sing along that "Na, na, na, nanana, hey Jude" part with Paul McCartney. And if he sang "Here, There and Everywhere" I would jump up for joy, it would so make my day. Maybe this is the biggest sign I'm way way past the MTV demographic. Shut up, MTV."